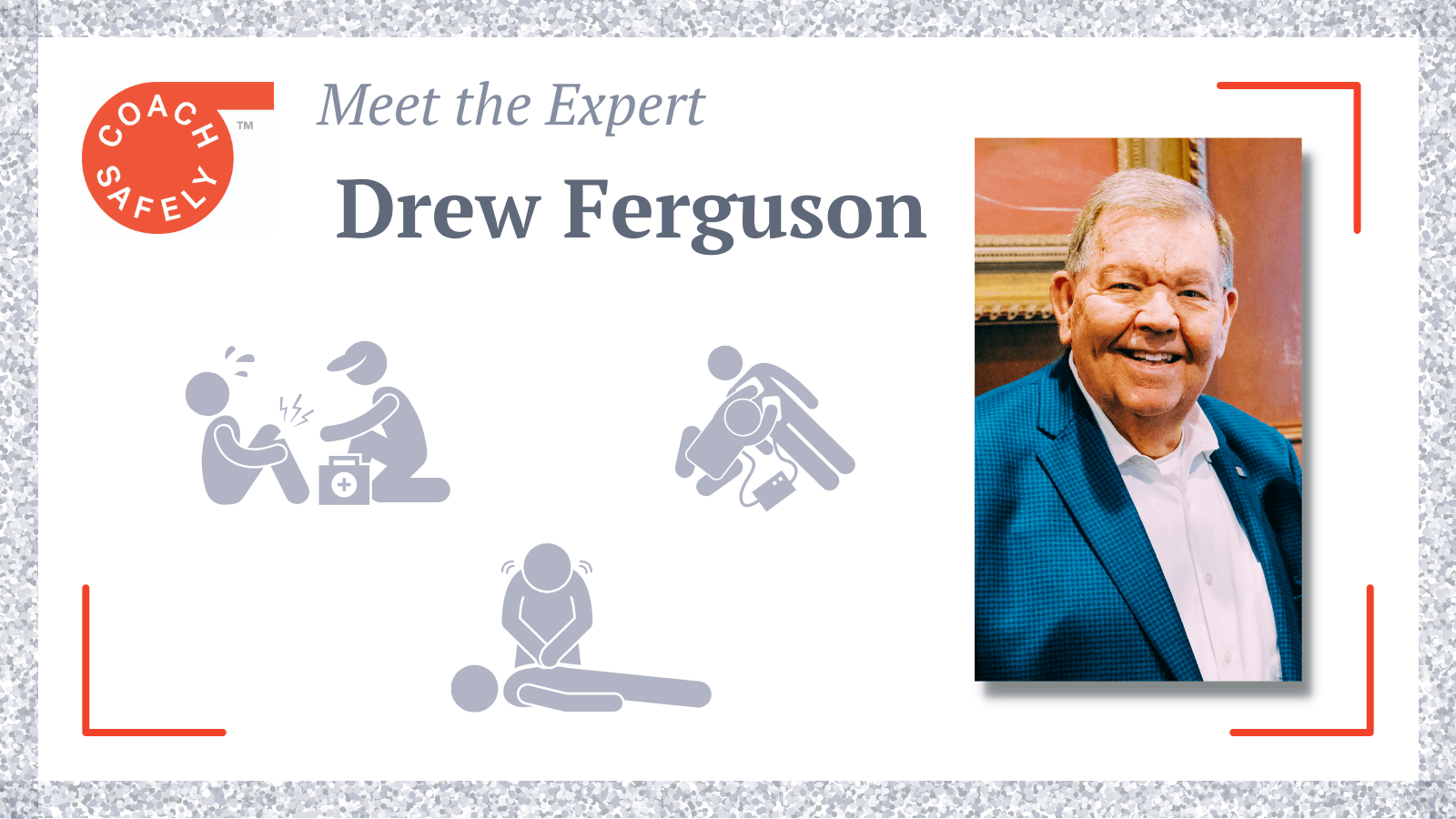 For this legendary athletic trainer and administrator, keeping young athletes safe is personal

Did you see it? Were you watching Monday Night Football on the first Monday in January of 2023? Did you see Damar Hamlin of the Buffalo Bills make what looked like a routine tackle, setting off a chain reaction of extraordinary events that saved the young man’s life?

How did you react? Were you shocked when he got up, stumbled and fell down, where he lay motionless on the turf? When EMTs arrived in an instant to administer hands-on CPR and deploy an AED? When you learned later that his heart had stopped and he had to be revived?

For Drew Ferguson, the CEO of the CoachSafely Foundation, a certified athletic trainer who has dedicated his life to keeping young athletes safe, the emergency playing out live on national television was achingly familiar.

His younger brother, Don, died of sudden cardiac arrest when he was 14 years old. “It was February the 8th of 1971,” Ferguson said, the date etched in his mind and in his heart. “I had been home from college that weekend. He and I had played basketball.”

At the time, Drew was a University of Georgia freshman working toward an undergraduate degree in education. Don was eighth-grade class president and a member of the basketball team at Clarkston High School in Dekalb County, Ga. There was no junior high there, and high school started in eighth grade. They were playing pickup basketball in PE class that day. Don, bringing the ball in, collapsed.

Bill McDonald was the first responder. He was an assistant basketball coach, a biology teacher and the first athletic trainer hired by a Georgia high school. McDonald, who would become a friend of Ferguson’s and the longtime athletic trainer at the University of Alabama, performed CPR on Don at the gym, Drew said, “and his color came back.”

But in that time before the invention of the automated external defibrillator (AED), the hope was temporary. “He didn’t make it,” Drew said. “He was DOA at Dekalb General.” Emergency medical services at the time were primitive compared to today. Ferguson knows these services like the back of his hand. He’s helped provide them for decades while working with high school, college and professional sporting teams and events, from the Birmingham Americans and Vulcans of the World Football League to UAB, where he was the program’s first athletic trainer under Gene Bartow, to the 1996 Summer Olympics in Atlanta, where he was one of the athletic trainers for the U.S. track and field teams.

Let him describe the resources EMS did and didn’t have to try to save his brother.

“They didn’t have AEDs. They hadn’t been invented. The ambulances back then, the EMS, were just a stretcher and oxygen. They didn’t even have atropine and the cardiac drugs, much less defibrillators.”

The family’s pain had just begun. His brother’s death, Drew said, “changed the whole dynamics of my family. My mother, who had never been sick a day in her life, got cancer within six months and died a year later. A month after she died, my dad had a massive heart attack. He survived it, but he wasn’t the same and eventually he had another heart attack a year later. I lost my brother and both parents within a four-year period of time.”

Helping to make Alabama a national leader in sports safety

Ferguson turned that series of tragedies into a lifetime spent preventing and easing the pain of others. He has initiated and coordinated efforts to put AEDs in Birmingham and Jefferson County High Schools and followed up to make sure those devices were accessible as part of an emergency action plan. Since 2010, he has served on the medical advisory board for the Alabama High School Athletic Association, which requires all of its coaches to take CPR and AED training annually.

He also has been actively involved in public health legislation in Alabama, from the 1993 Athletic Trainer Licensure Act to the 2011 Statewide Concussion Law to the 2018 Coach Safely Act. It is no surprise that, among his many honors and awards, he was inducted into the Alabama Athletic Trainers’ Association Hall of Fame in 2002.

As the CEO of the CoachSafely Foundation, Ferguson works to help the non-profit set a new standard for youth sports safety. By creating a comprehensive, evidence-based and peer-reviewed syllabus in injury recognition and prevention, CoachSafely focuses on educating youth coaches and parents.

“I feel like if you’re going to coach, you have an obligation to have that knowledge, and if you’re a parent, you have an obligation to ask the question,” Ferguson said. ‘Is my son’s or daughter’s coach trained? Do they have the knowledge to recognize a sudden cardiac arrest or a heat stroke or a concussion?’ If the answer is no, the parent should say, ‘Why not? What can I do to help?’ ”

That’s Drew Ferguson. He’ll tell you about his neighbors who coach their kids and take the CoachSafely course every year. He’s working on a CoachSafely project to make more certified athletic trainers available to youth athletics associations across the state. Oh, and he carries an AED in the trunk of his car just in case.

“We’ve made such technological advances, but the thing is education,” he said. “It’s what we’re trying to do at CoachSafely. It’s our mission. It’s amazing to me the resistance we get from even some of the leaders saying that if you make it mandatory, it will hurt us to get parents to be coaches because they don’t want to do it. I say if their kid needed CPR they would be happy that you had that knowledge and ability to save their life.”

Fifty-two years ago, Drew Ferguson lost his brother and gained a purpose. It has guided him and driven him to this day.

“A lot of people embrace our CoachSafely course and are happy to be able to get the knowledge free of charge in this state,” he said. “We’re making progress. There’s no question about it.”