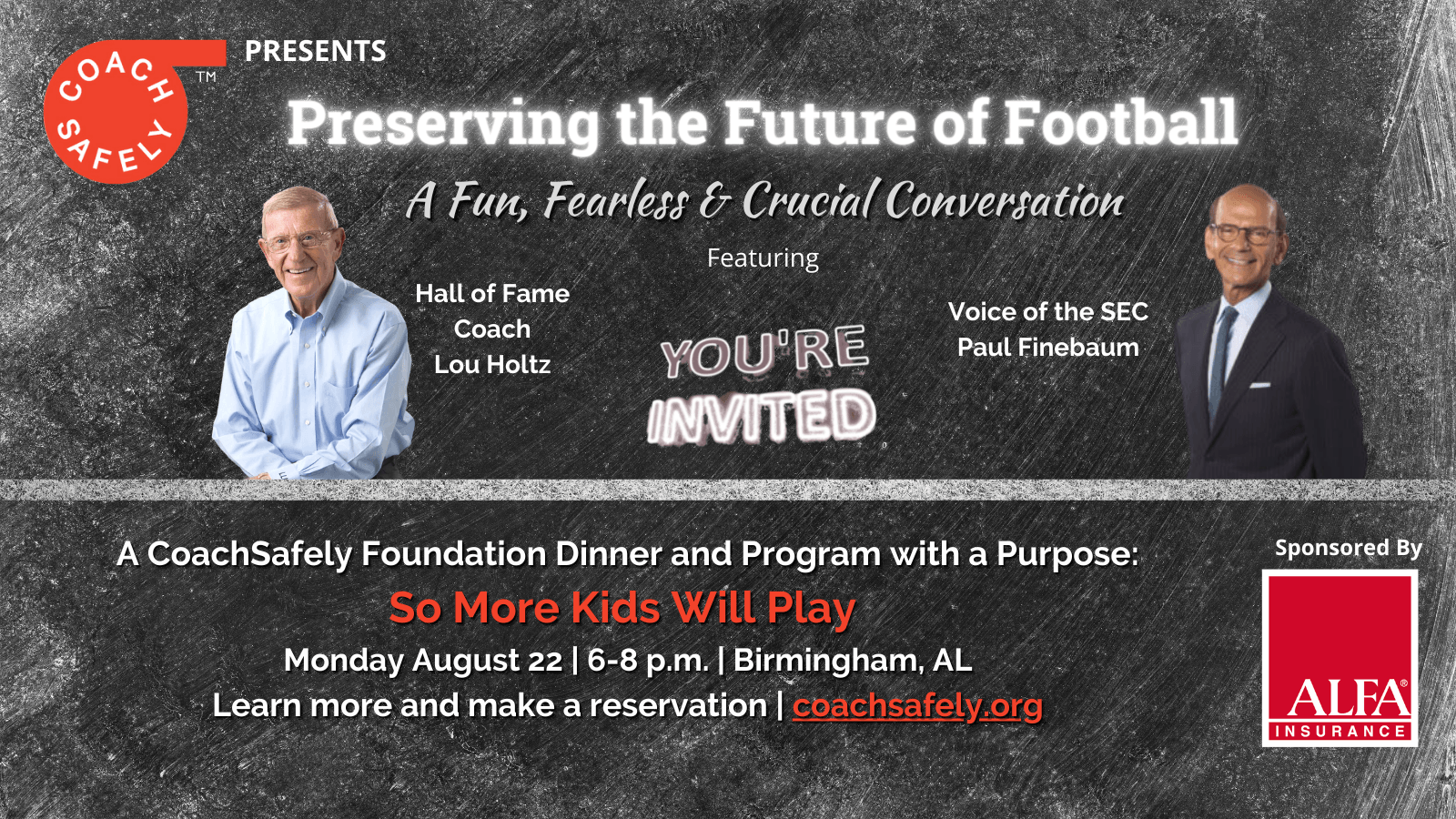 His experience as a coach and a father made one thing perfectly clear.

“We have to make sure that the safety of the people playing the sport is absolutely critical,” he said. “That’s your No. 1 obligation.”

His belief in player safety is bringing Holtz to Birmingham as a featured speaker for an August 22nd CoachSafely Foundation event. He and Paul Finebaum, the Voice of the SEC, will engage in a fun, fearless and crucial conversation on “Preserving the Future of Football.”

In advance of his visit, Holtz shared a message for youth coaches on how they should mentor their young athletes: “Let’s make sure they’re safe, that they have fun and they understand the real value of a team sport.”

There is a greater emphasis on safety in sports at all levels today, from pee wee to the pros. Long-time college football coach Jack Crowe and renowned orthopedic surgeon James Andrews created the CoachSafely Foundation to give youth coaches the injury recognition and prevention knowledge they need to keep the youngest athletes active, healthy and safe.

Former players and coaches like Holtz – who played college football at Kent State – get asked regularly when children should play the sport.

“The most important thing for young people in sports is two things,” Holtz said. “One, they want to participate. Not the parents. People say, ‘When should my son start playing football?’ When he wants to play.

“No. 2, have fun. It isn’t about winning and losing. It’s just have fun with what you do. I learned more on a college field than I ever did in a college classroom. Sports is such a great thing because it teaches working with other people, getting up off the ground, overcoming adversity, where you put the overall good of the group above your own personal wishes and desires.”

“The most important obligation you have as a coach is the safety and welfare of your players,” Holtz said. He had a standing rule that if one of his players was hurting, they didn’t have to ask permission from a coach. They were expected to go see a trainer. He told his players, “You’re not going to impress me by passing out on the field. You’re just going to show me what a dumbass you are.”

Holtz’s son Skip, who just coached the Birmingham Stallions to the championship in the first year of the new USFL, showed his dad something as a young baseball player that still resonates today. Holtz’s first North Carolina State team had just beaten Bobby Bowden and West Virginia in the Peach Bowl. Holtz, an Ohio native, was named Ohio Valley Man of the Year.

“Now this was a big thing,” Holtz said. “Woody Hayes came to give me the trophy, which was remarkable.”

Hayes, the Ohio State coaching legend, was a mentor to Holtz. He spent the 1968 season on Hayes’ Ohio State staff before taking his first head coaching job at William & Mary, and the Buckeyes won the national championship. So of course he put “this huge trophy” on the mantle at home.

Some time later, Skip Holtz, then a Little League baseball player, earned a trophy of his own for making the All-Star team.

“He came home, without asking me, took down my trophy and put his on the mantle,” Holtz said.

Did Skip’s trophy stay there?

“Absolutely,” Holtz said. “There was no way in the world I would ever put mine back up. That little trophy meant as much to him or more than the big trophy I received from Woody Hayes meant to me.”

Holtz said he didn’t force his children to play sports, but he did have a rule if they chose to play.

It had to be tempting for an accomplished college coach to want to share his expertise with his children, but Holtz said, “I just tried to be a Dad. Now when my sons wanted to play baseball, I’d get them out in the backyard and with a tennis ball, I would pitch to them. But that guy’s the coach. I’m not going to try to coach you. I’m going to support you and go to your games, but I’m also going to support the coach.”

That’s what CoachSafely does, supporting youth coaches by providing them with the state-of-the-art training course of injury recognition and prevention. Holtz supports that mission.

“CoachSafely is critical,” he said. “By coaching safely, more kids will enjoy the sport and more of them will want to play.”