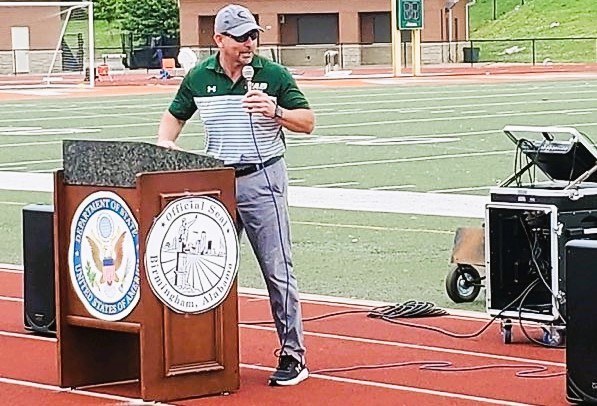 Today’s the day for Bill Clark. It’s the last official day of his incredible, indelible tenure as the UAB head football coach. Come Monday, his retirement will begin at the ripe old age of 54, two weeks after undergoing spinal fusion surgery to address his debilitating back pain and improve his quality of life.

“It’ll be bittersweet those first few days of practice,” Clark said, anticipating his first August without preseason workouts in four decades. “Missing them (his players and coaches) and missing it (the game of football).”

The transition will be as challenging in its way as the early recovery from surgery. The other day, Clark walked a little too hard for a little too long and felt it the next day. Good news is, he’s not feeling persistent pain radiating down his leg as he did for far too long before the surgery and the numbness is almost gone.

They tell him it’ll be two months before “you start feeling good,” he said. “This is the one time I’ve got to be patient and let it heal.”

One project on his plate to fill the coaching void is his position as vice president of the CoachSafely Foundation, a non-profit based in Birmingham. CoachSafely is dedicated to training youth coaches to prevent and reduce injuries so more children will participate in sports. Clark is taking on an expanded role with the foundation. His first mission is selling tickets to an Aug. 22nd CoachSafely fundraiser in Birmingham, “Preserving the Future of Football,” featuring Hall of Fame coach Lou Holtz and Voice of the SEC Paul Finebaum.

“To have those two guys promoting what we’re doing at CoachSafely and promoting the game of football, it’s going to be a fun event,” Clark said. “What a great cause.”

So how did a two-time national college coach of the year who brought an FBS program back to life to deliver the first conference titles and bowl victories in school history get involved with a foundation dedicated to educating coaches and protecting players at the youth level? Two words: Jack Crowe, the founder and chairman of CoachSafely.

He and Clark have much in common. They’re both Alabama natives who worked their way up through the coaching ranks, Crowe on the college level, Clark in high school. They both served as head coach at Jacksonville State, Clark for one season following Crowe’s successful 13-year tenure at Clark’s alma mater. Each was part of a memorable turnaround, Clark at UAB and Crowe as Pat Dye’s offensive coordinator at Auburn while the Tigers won the first of four SEC titles in the 1980s and Bo Jackson won the Heisman Trophy.

Clark and Crowe had known each other for years, going back to a mutual interest in the wishbone offense shared by Crowe and Clark’s dad, Ragan, an Alabama high school coach. As the Jacksonville State head coach, Crowe had recruited Clark’s Prattville High School players.

Their relationship strengthened when UAB reinstated football in June of 2015 after announcing a shutdown of the sport six months earlier. Crowe, retired from coaching, was living in his hometown of Birmingham, growing the CoachSafely concept. As a UAB graduate and personal friend, he wanted to help Clark resurrect the program on solid ground. Clark knew UAB needed an athletics foundation to give structure and credibility to its fundraising efforts, and he knew Crowe had particular expertise in that area from his days at Auburn, Clemson, Arkansas and Jacksonville State.

Clark said Crowe was “a great sounding board” on many subjects and “instrumental” in the effort that led to the formation of the UAB Athletics Foundation. “That was the game-changer,” Clark said. “Of all the things we did, creating that foundation was the biggest. That was the vehicle we needed.”

At the same time, Crowe was spearheading an effort that led to Alabama’s groundbreaking 2018 Coach Safely Act, the first state law of its kind, mandating that youth coaches must be trained in a comprehensive course of injury recognition and prevention. Crowe, well aware that Clark shared his passion for player safety and coaching education, recruited his friend to join the CoachSafely Foundation’s executive team.

Crowe has a long history as a thought leader in sports medicine, which includes serving on the National Council of Youth Sports Safety and as executive director of the American Sports Medicine Institute. Another close friend, the world-renowned orthopedic surgeon Dr. James Andrews, helped him develop CoachSafely, which Andrews serves as medical director. Crowe’s UAB degree is in chemistry, and as Clark said, “he wanted to be a doctor but became a coach.”

As the son of a coach himself, Clark understood the impact coaches have on players at every level. He knows what it means to have players reach out years later to express their gratitude. He’s heard from plenty of them since he announced his retirement June 24th.

There are two things every man thinks he knows how to do, grill a steak and coach, but it’s not something you fall out of bed and know how to do – Bill Clark

“I’m a fan of coaches,” Clark said. “I mean coaches that care. There are so many good ones, but at the youth level, we need to show people how to coach. There are two things every man thinks he knows how to do, grill a steak and coach, but it’s not something you fall out of bed and know how to do.”

The CoachSafely training course provides that knowledge. For Clark, “it was a natural” to join Crowe and Andrews as a member of the CoachSafely executive team.

Crowe has a special appreciation for the job Clark did at UAB and the heart for coaches he brings to CoachSafely. Both men are students of the game. At one point, Crowe went to the whiteboard in Clark’s office to illustrate his friend’s place in history, drawing arrows between names to make his point.

Clark was amazed and humbled by that thread. “You’re rooted in history,” he said, “but you grow with the times.”

As Clark grows into his expanded role with CoachSafely, he’ll help educate and motivate youth coaches. Come Aug. 22nd at the CoachSafely fundraiser in Birmingham, he’ll connect with Holtz, who stands behind Rockne at No. 3 on the list of winningest coaches in Notre Dame history.

“I’m going to miss coaching,” Clark said, “but I’ve got things to do to keep me busy.”

That to-do list starts with recovering from surgery and passing down his knowledge through CoachSafely. To learn more and make a reservation, click HERE.