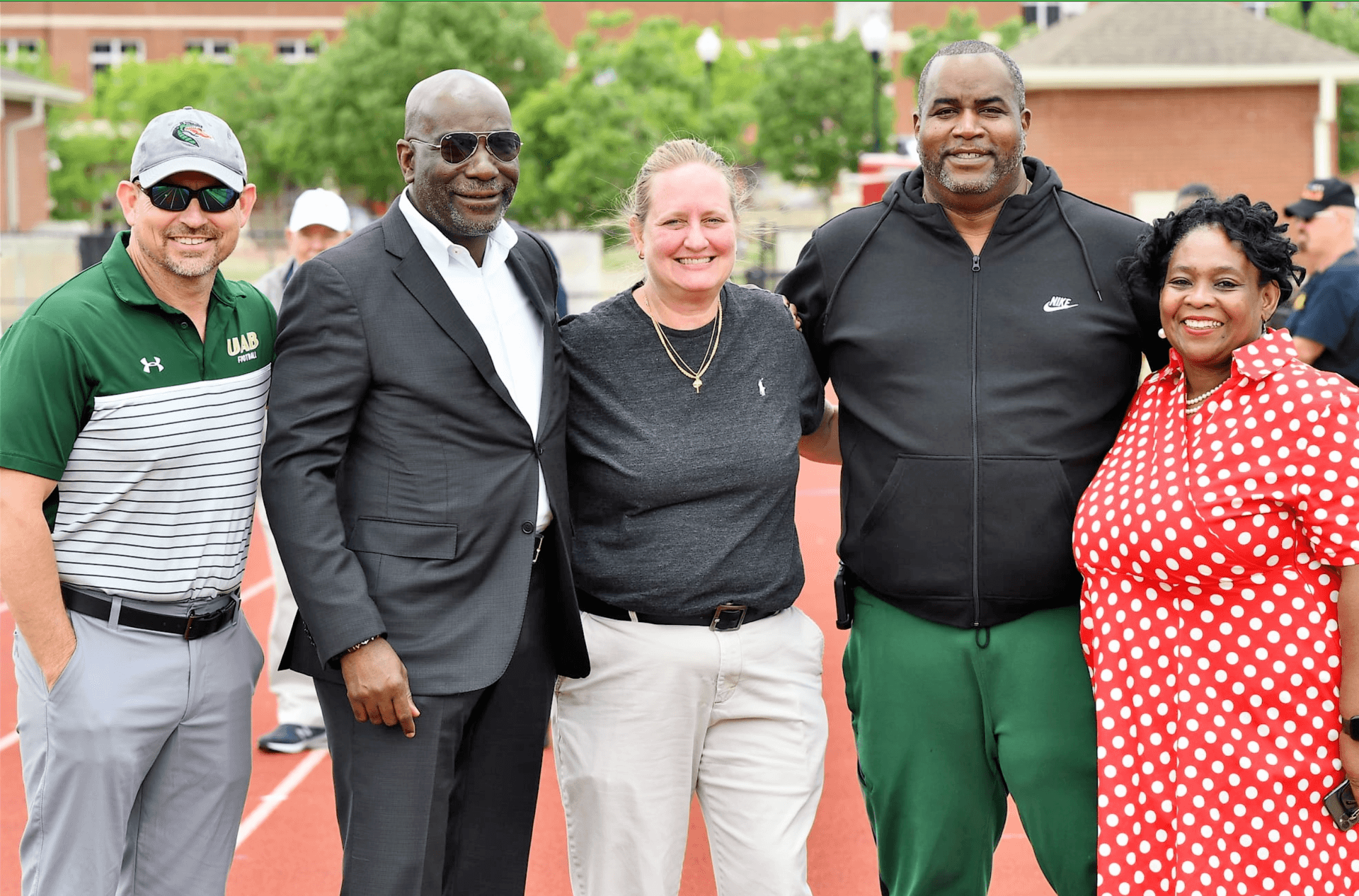 She woke up early fully of 9-year-old energy. It didn’t matter that it was Saturday. Her grandmother had told her they were going to the first annual Birmingham City Schools Let’s Move Community Huddle, and not long after dawn, a couple of hours earlier than they needed to leave for the event at Huffman High School,  she was up, and she was ready. Ready to move.

At the end of the day, when the fun was done, after soccer stations led by members of the FC Birmingham Soccer Club, fitness drills with U.S. Marines and an inspirational message from UAB Football Coach Bill Clark, she wanted to keep going. She challenged me to race one time around the track. I told her I might have to stop halfway and take a nap, but my son Kaiser, who ran the 400 meters in high school, could do it. Next thing I knew, there they went, bouncing away.

Her grandmother, a physical education teacher with Birmingham City Schools, couldn’t stop smiling. She appreciated the event, designed to inspire more families to get their children moving so they can enjoy the physical, mental and social-emotional benefits that flow from youth sports participation. The outstanding Let’s Move program, directed by Dr. Sherri Huff, offers BCS students the opportunity to participate in a number of sports throughout the school year, including flag football, basketball, softball, Newcomb, track and cheer, so they can “be active and build lifelong health habits in a positive environment.”

The distinguished guests who took time on a Saturday to participate in the Community Huddle sent a powerful message about the importance of physical activity in a young person’s development. Dr. Huff, Dr. Mark Sullivan, the BCS Superintendent, and Dr. Pamela Williams, BCS Executive Director of Curriculum and Instruction, offered words of support and encouragement to the children and families there. So did Huffman High School Principal John Lyons, Major Vince Thompson, Commanding Officer of Marine Recruiting Forces in Alabama, and David Kearney of the FC Birmingham coaching staff and management team. Alabama State Representative John Rogers and Fred Primm, Chief of Staff for Jefferson County Commissioner Lashunda Scales, visited to show their support as well.

The children were the stars, and their smiles were the sun.

While the event was the CoachSafely Foundation’s first collaboration with Birmingham City Schools, it was the latest in the foundation’s Community Huddle series, which began with a 2019 Youth Sports Safety forum at the Alabama Sports Hall of Fame. CoachSafely was represented at Huffman High School by Founder and Chairman Jack Crowe; CEO Drew Ferguson; Director of Policy & Programs Terri Winston; Tiffany Wade of the ARPA/CoachSafely Initiative, which delivers the CoachSafely injury recognition and prevention training course to youth coaches through the Alabama Recreation and Parks Association; and me as MC.

But the children were the stars, and their smiles were the sun. As we wrapped up and packed up, as that 9-year-old girl and my college-student son jogged back toward us, her grandmother and I talked about young people at play and the simple joy it brings – them and us. She beamed in the direction of her granddaughter and said, “She can run all day.”

We both agreed. It’s our responsibility as adults to give her and every young person every opportunity to expend that positive energy, to build on the spirit of the Community Huddle. Let’s move in that direction together.